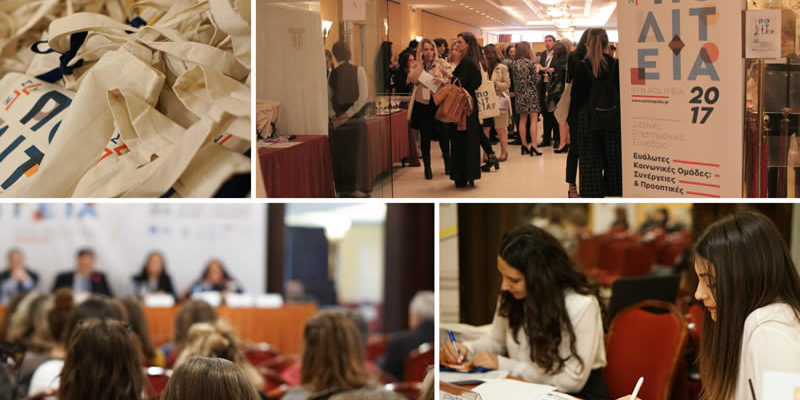 Xenios Polis and the Representation of the European Commission to Greece organized the International Scientific Conference Vulnerable Social Groups: Sυnergies And Perspectives. The conference took place on  Friday March 31 and Saturday April 1 2017 at Titania Hotel(Panepistimiou 52, Athens).

With the support of ELEPAP, the National Centre of Social Research, the Ark of the World, UNICEF, the Family and Child Care Center, CARDET, ALDA, TESLA Network.

Under the Auspices of Municipality of Athens.

The current economic crisis in Greece hasled to an alarming rise of the poverty and social exclusion rates. According to a recent OECD study, 1/3 of Greek population lives in poverty conditions while the high unemployment rates worsen further the existing social unrest.
This economic crisis has shaped a complex social status quo in which the vulnerable social groups have been the first “victims”, living in high risk of poverty and social exclusion. As the European Commission states, ‘on the one side the inequalities gap between the vulnerable social groups and the rest of population widens and on the other side the number of these groups is multiplied’. The vulnerable social groups (persons with special needs, elderly people, minorities, drug users, etc.) have been enriched with the single-parent families and the in-work poor. Apart from this, the existing social changes have affected the social structures and thus ad hoc sensitive groups have been created, for example families with the couple living in different countries due to migration. Lastly, the current migration and refugee crisis has put forward new social needs such as the primary care for migrants and refugees (healthcare, etc.) as well as their social integration through their formal and informal education and socialization processes.

Combatting poverty and social exclusion has been set as a key priority for the European Strategy 2020 expecting that at least 20 million people will no longer live in poverty and social exclusion conditions. The EU has developed a set of important policy tools towards the abovementioned goal: the European Pillar of Social Rights, the Platform against poverty and social exclusion and the European Social Fund, for a better and a more effective social and economic integration of the vulnerable social  groups.
The EU has responded to and managed effectively the unprecedented refugee and migrant crisis through humanitarian aid. More specifically, the European Commission provided member-states with a total funding of 700 million euros for the period 2016-2018, from which 83 million euros have been given to Greece on covering special needs such as housing, primary healthcare, potable water for migrants and refugees. Moreover, 18 member-states of the EU have provided Greece with assistance in kind through the Political Protection Mechanism.
At the same time, the refugee and migration crisis has been a great impetus for the re-shaping of migration and asylum policy. As one of the ten Commission’s priorities, the EU has set in the European Migration Agenda the following priorities: incentives limitation for illegal migration, the effective border management, a strong common asylum policy and the shaping of a new policy for legal migration with better integration policies and benefits maximization.

The importance and the innovative character of the Conference

The effective and consistent economic and social support of the above mentioned groups can be achieved through a coordinated action by all the responsible actors (national, international and non-state) on the basis of common challenges.
This conference aims at presenting a series of contemporary research results and policy proposals for vulnerable social groups and relative thorny social issues.

The conference will address the following questions:

At a second level, the conference aims at building partnerships and co-operations between organizations, foundations and associations (at a national or international level) that promote human rights protection and coordinate programs which both focus on social integration and solidarity and combat social exclusion. In any case, it is expected that a common ground for further cooperation and new ways of citizens’ awareness raising on considerable social issues will be constructed.

The main thematic areas of the conference are:

You can read more information and download the participation form here

This website uses cookies to improve your experience while you navigate through the website. Out of these cookies, the cookies that are categorized as necessary are stored on your browser as they are essential for the working of basic functionalities of the website. We also use third-party cookies that help us analyze and understand how you use this website. These cookies will be stored in your browser only with your consent. You also have the option to opt-out of these cookies. But opting out of some of these cookies may have an effect on your browsing experience.
Necessary Always Enabled
Necessary cookies are absolutely essential for the website to function properly. This category only includes cookies that ensures basic functionalities and security features of the website. These cookies do not store any personal information.
Non-necessary
Any cookies that may not be particularly necessary for the website to function and is used specifically to collect user personal data via analytics, ads, other embedded contents are termed as non-necessary cookies. It is mandatory to procure user consent prior to running these cookies on your website.
SAVE & ACCEPT